(116 votes) Lascia un commento
Kotoro is the first atmospheric puzzle game about color mixing based on the rules we all learn as children.
$1.99 SCADUTA 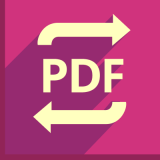